Just announced! 14 Luxembourg start-ups in a variety of categories have been chosen for the StartUp Europe Awards 2017 by Startupgrind  Luxembourg in cooperation with Luxinnovation and Silicon Luxembourg.

On January 29, 2018 it was announced that Luxembourg has start-ups in the Agritech, Climate, Creative, Cybersecurity, Edtech, e-Health, Energy, Fintech, IoT, Smart Cities, Social, Space, Tourism and Water categories that will participate in the StartUp Europe Awards 2017.

StartUp Europe Awards presents a prize methodology for start-ups at local, regional, national and European level that fosters the open innovation and the collaboration between the different actors of the European ecosystem, through the private-public partnership to support entrepreneurs. This also helps to develop a strong network of contacts that will inspire and provided visibility to all the local start-ups so that, by using this network, they can scale their services and products at a global level.

Stefan Berend, Head of Start-up Support says, “The selection of the nominated companies was done in collaboration with the Luxinnovation Cluster Managers. StartUp Europe is a great opportunity for the nominees to gain visibility on an international scale.” Luxinnovation will provide further updates detailing information about each selected start-up.

The start-up nominees are: 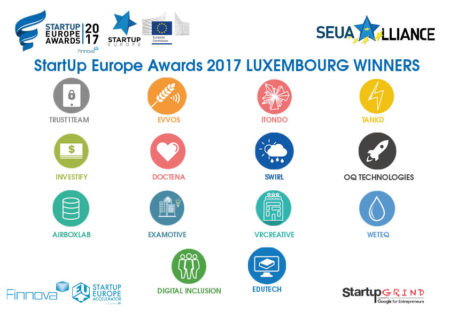