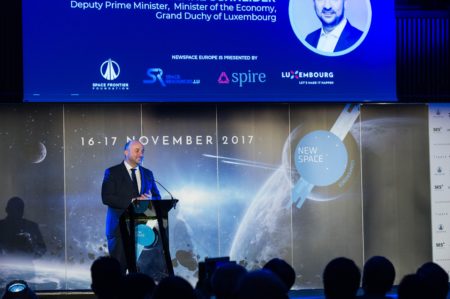 A member of the Luxembourg Socialist Workers’ Party would seem to be an unlikely champion of asteroid mining ventures. But Étienne Schneider, who represents his party in Luxembourg’s coalition government as deputy prime minister and minister of the economy, has become the biggest proponent of the emerging space resources industry among government officials in any country.

Under Schneider’s leadership, the country established its SpaceResources.lu initiative in 2016, offering 200 million euros — and promises of a friendly legal regime — to attract space resources companies to the country. That has lured companies including Deep Space Industries and Planetary Resources from the United States, and ispace from Japan, to set up offices in Luxembourg. In July, Luxembourg’s parliament passed legislation that grants companies operating from the country rights to space resources they extract, similar to a U.S. law passed in 2015.

However, those efforts have attracted more than just lunar and asteroid mining companies. In November, Spire announced it would establish its European headquarters in the country, which will eventually host as many as 250 employees. In turn, the Luxembourg Future Fund would participate in Spire’s $75 million Series C funding round. Schneider hailed the deal as the latest milestone in “our government’s three-decade history of attracting ground-breaking companies in this sector,” dating back to the formation of Luxembourg-based satellite operator SES in the 1980s.

There’s more to come from Schneider and Luxembourg. In a speech in November at the NewSpace Europe conference in Luxembourg, he said the country was working to establish a national space agency that will act as a public-private partnership with venture capital funds to invest in more space companies. “Luxembourg is ready and eager to support and nurture the growing number of commercial space initiatives,” he said.