GovSat-1 satellite ready to be launched

“This is obviously a very exciting moment,” says Patrick Biewer, CEO of the company created as a public-private partnership between the Luxembourg government and global satellite operator SES. “The launch is one of the step of our history, but it’s evidently a key part of the company’s history.”

LuxGovSat was set up in February 2015 in order to realise the ambitious goal of creating a new value proposition that did not yet exist on the market: making satellite capacities available for governmental objectives that would have a higher level of security than traditional commercial satellites, while following a business logic to provide more affordable and accessible capabilities than dedicated national satellites.

“A public-private partnership was the best way to start this project,” explains Patrick Biewer. “More precisely, this partnership made it possible to combine the know-how of the Luxembourg space industry, available through SES, with the regulatory capacities, diplomatic relations, stability and good reputation of the Luxembourg state. This is essential to create such a value proposition for other governments and supranational organisations.”

The first client of LuxGovSat is obviously the Luxembourg State that will use it for its own defence activities. The State is investing a total amount of €100 million over 10 years. “This provides strong support to the entire business model that allows us to embark on necessary and significant investments,” says the CEO of LuxGovSat. The initial investment in the company LuxGovSat, covering among others things the construction and the launch of the satellite, amounts to a total of €225 million.

Following international calls for tenders, the construction of the satellite was entrusted to the American company Orbital ATK and the launch to SpaceX. The Falcon 9 rocket was chosen according to purely economic and technological criteria. SpaceX has innovated the space launcher business with the development of a flight-proven rocket.

Once in orbit at 21.5 degrees east, GovSat-1 will be operational within approximately four to six weeks. This is the time needed to finalise its positioning, carry out the tests in orbit and then transfer services that have already been commercialised by the company and are currently operational on other satellites.

The joint venture, which today directly employs around 20 people in charge of either technical – ground stations – or commercial aspects, has obviously not been satisfied with simply waiting for the launch of the SpaceX rocket. It has already concluded several contracts, the most spectacular being the one signed in November 2016 to make satellite communication capacities available in the context of the NATO Alliance Ground Surveillance (ASG) programme. “Other services have also been put in place for several NATO agencies,” indicates Patrick Biewer.

According to the LuxGovSat CEO, it will take a few years before the capacities of the Luxembourg satellite are completely used. But this does not stop the company from already thinking about a possible widening of the scope of activity or even, in the most optimistic case, the implementation of a second satellite.

At the moment, the position of the satellite allows it to mainly cover Europe, the Middle Est and Africa. For covering zones such as Asia-Pacific where needs are growing quickly, some adjustments in addition to this first satellite are obviously necessary. “All commercial or technological options are possible,” underlines Patrick Biewer. “This extension of our activity is also part of our thoughts of these two last years.” 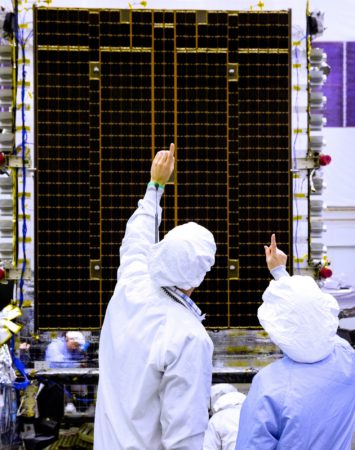 The manufacturing of GovSat-1 (Picture: LuxGovSat)