Luxembourg ranked 12th in the EU cities of the future

In February 2018 the magazine fDi Magazine, a division of the Financial Times group, published a new edition of its study measuring the attractiveness of European cities and regions for foreign investors. The indicators that are used to measure this attractiveness are mainly divided into five categories:

A sixth category is about the policies implemented concerning the promotion of foreign investments. On the basis of the performances obtained, cities and regions are then evaluated on a scale of 1 (minimum) to 10 (maximum).

The City of Luxembourg ranks overall 12th in the European cities of the future. 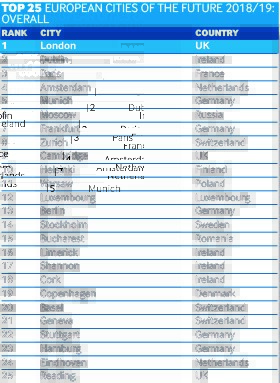