Luxembourg ranked 5th in the EU 2018 Index of economic freedom

Luxembourg’s economic freedom score is 76.4, making its economy the 14th freest in the 2018 Index. Its overall score has increased by 0.5 point, with improvements in scores for the government spending, labor freedom, and monetary freedom indicators offsetting declines in property rights and trade freedom. Luxembourg is ranked 7th among 44 countries in the Europe region, and its overall score is above the regional and world averages.

Luxembourg is one of the world’s wealthiest countries. It has one of the eurozone’s highest current account surpluses as a share of GDP, maintains a healthy budgetary position, and has the region’s lowest level of public debt. Economic competitiveness is sustained by the solid institutional foundations of an open-market system. The judiciary, independent and free of corruption, protects property rights and upholds the rule of law. High levels of regulatory transparency and efficiency encourage entrepreneurial activity. 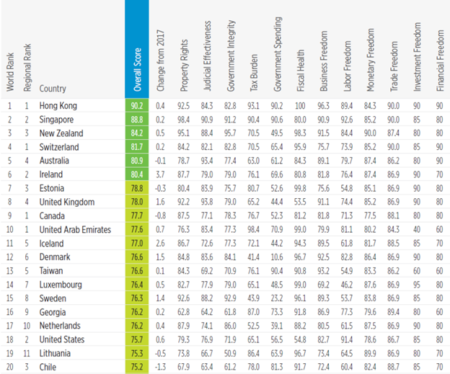