The promotion of Luxembourg takes flight in a new animated film

The new promotional short film of Luxembourg previewed on 6 February 2018 at the Starlight cinema of the National Audiovisual Centre in Dudelange. Directed by Laurent Witz, it showcases the country in a poetic and offbeat way, and without ever mentioning the name, encouraging the viewer to allow his/her imagination to take flight.

A bird with paper wings takes flight. It then becomes a mechanical wooden bird by the grace of a luthier (one who repairs string instruments), then “high tech” after passing through the hands of engineers … The promotion of Luxembourg took off on a new Tuesday, with a preview of the animated film directed by Laurent Witz (CEO of Zeilt Productions). “In a heartbeat, the idea comes to life and takes flight. Soaring higher than anyone could have dreamed. Even its inventors. Ideas bring us together. We work together to make them reality. Together we create change.”

An Oscar Winner in 2014 for his animated short film “Monsieur Hublot”, Laurent Witz infused a feeling of “sensitivity” for the realisation of this short animated film which is intended to be broadcast internationally (four language versions exist: French, German, English and Luxembourgish). “The script of the short film carries a strong and engaging message that perfectly conveys the promise embodied in the country: further together,” said Secretary of State for the Economy, Francine Closener, on the occasion of the first public screening of this film.

One day for one second 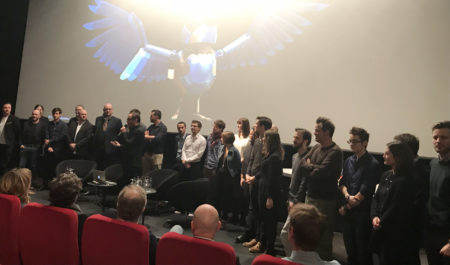 “Sensitivity” is a word that has been repeated many times last Tuesday, both by Laurent Witz and by the members of his team, when describing their work. An epic project that lasted four months, mobilised 50 people – technicians and programmers – representing a total of some 900 working days. Tens of thousands of lines of code were written which sometimes became very tedious. For just one second of animation it usually takes a day of work for an animator because the big challenge for the Zeilt Productions and Skill Lab teams was to integrate animated characters in 3D into the middle of real images, mostly shot with a drone.

“We had precise specifications, which sometimes limited us,” explains Laurent Witz. “But it also pushed us to look for something else and to ask other kinds of questions, which in turn opened us up to another kind of creativity where one finds ways to go beyond these limitations. It was a driving force for inventing new things. ”

From fog into the spotlight

Among the many “little hands” who worked on this film were those of Carlo Vogele, who supervised the animated film sequences. He has always liked to focus his work on a mix of “subtlety and sensitivity”. Formerly from Pixar studios (he collaborated on films such as Toy Story 3, Cars 2, Brave or The Good Dinosaur), he recognised in the style of animation that Laurent Wit wanted these same elements which had become part of his daily work in California. “It needed characters with a look somewhere between cartoon and realism; and an animation and movements that require a lot of simplicity, without exaggerated gestures. In short, we had to do less to bring out more emotions. ”

The obstacles were not only technological. The search for the luthier’s workshop, for example, was fruitless for a long time and it was ultimately via a message posted on social media networks that the work space of Jean-Pierre Reitz in Pétange was identified. “As soon as I saw it, I immediately said, ‘This is it!’”, says Laurent Witz. Not to mention as well the vagaries of the weather, affecting the shooting even as early as August. “We had to come back to Vianden several times, for example: the weather was forecasted to be nice, but once there, there was so much fog that we did not even see the castle. We sometimes spent hours waiting for nothing. ”

To close, this very poetic and dreamlike short film comes in two versions, one of 2 minutes and the other of 30 seconds. Accessible via the YouTube channel of Inspiring Luxembourg and the Facebook page “Let’s make it happen”, the film will also take off: in the country’s cinemas and those of the Greater Region, as well as on Luxembourg television, but also, later, beyond borders, on major media websites including Germany, Belgium, France and Japan, to accompany state visits, economic missions and other international events in which the country will participate.